The 62nd Best Bowler of the 20th Century Revolutionized The Game 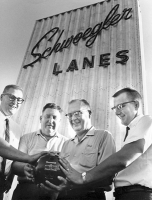 A recent article by J.R. Schmidt in the National Bowlers Journal focused on Connie Schwoegler (that’s pronounced “Schwagler,” not “Schwogler”), voted the 62nd of the best all-time 20th century bowlers.

Never heard of Connie? For those of you that have not heard of Schwoegler, he is most famously known to have popularized the three hole fingertip grip in the 1940’s as a result of his osteoarthritis from the traditional two hole conventional grip of that era (thumb and one finger).

My relationship with the legend of Schwoegler first began in 1968, when a man by the name of Primo Liberatore purchased the local bowling center in my hometown of Sebastopol, California. After years of managing John Swanson’s Westlake Bowl in Daly City, California, Primo and his nephew Mel Del Gallo decided to take a chance and purchase the thriving L & L Lanes. 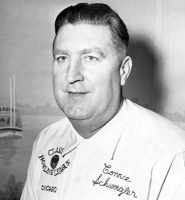 Primo, a single parent with two young girls named Sandi and Rene, took our group of rag tag bowling groupies under his wing and treated us all like his own boys. Because I lived just a few hundred yards from the bowling center on a hill above the lanes and overlooking the Santa Rosa Valley, I became the favorite fair haired boy by reason of geography.

Liberatore’s ability to relate stories of his life experiences were monumental. I could literally spend hours listening to his amazing tales while cleaning tables, answering trouble calls and looking after the control desk while he ran to the bar to serve customers.

One of his favorite topics centered around Connie Schwoegler, when the two were together for a brief time in Chicago. Primo, a native of Chicago, was a fair bowler at the time, but Schwoegler was kegler royalty, with a couple of All-Star titles.

Before the Professional Bowlers Association (PBA) was formed, the All-Star was the tournament in the game of bowling, and Primo said that Connie attributed the finger tip, or Schwoegler grip, to his success.

Needless to say, within a few weeks I had changed from a conventional to a relaxed finger tip grip. My average shot up from the mid-170’s to over 200, using an Ebonite rubber bowling ball. While this was not the only prophetic event that led me to a career in bowling, it was certainly among one of the first.

J.R. Schmidt goes on to catalogue Connie’s success in bowling, including many of his endorsements with major products like Hamm’s Beer, Camel Cigarettes and Gillette Super Speed Razors. He’s also the only professional bowler to ever appear on the cover of Time Magazine, according to Schmidt.

My association with the name Schwoegler would come full circle years later, while working for AMF in New York. Along with my marketing duties, I was also often called upon to investigate possible bowling centers for acquisition into the AMF Bowling Centers chain.

Because of my unique background in the bowling center business, a quality lacking among most of the married AMF executives; I was the only one that could hop on a plane and go to a particular city and just camp out for a week, primarily investigating and confirming the league schedule provided by the owners of the potential acquisition.

One of those trips brought me to Madison, Wisconsin, where I was to investigate the possible acquisition of Badger Bowl and Village Lanes. Before I was about to leave on my trip, Bruce Gobbi, my boss at AMF, added another location to my list of possible acquisitions… Schwoegler’s Park Towne Lanes!

Bruce said not to spend a lot of time at Schwoegler’s, because they were probably just using this as an opportunity to see what their business was worth. But the opportunity to meet Connie Schwoegler was certainly a priority for me!

When I called Schwoegler’s to set up an appointment, I learned that Connie had passed away in 1982, but that I would be meeting with Bill and Dan Schwoegler. I remember being so impressed with their league schedule flyer, a trifold information piece on a heavy paper stock, that I used variations of this model for years among many of the AMF Bowling Centers.

When I was tossing around ideas for this article, I gave Bill Schwoegler a call to get some information and perhaps a unique picture that I could include with the story. Bill, an alert 84 years young, told me that the family had sold the business in 2012. But in spite of the fact that he was no longer involved, he was quite concerned the day that I called because the bowling center had flooded and there was major damage.

I could understand his concern and related my experiences with other owners that just could not let their business go after spending the major part of their life among the hallowed halls of their “bowling center baby.” A handful of the bowling centers that AMF purchased over the years even had clauses where the former owner could keep their office, with a private outside entrance constructed.

We reminisced for a time and swapped our favorite Dick Weber stories. Before closing I apologized for saying “Schwogler,” instead of “Schwagler.” He was amused by my admission and gave me a quick German language lesson involving umlauts.

You never know what might become of a chance meeting in your life. If it wasn’t for Connie Schwoegler befriending Primo Liberatore during their time together in Chicago, and then Primo relating the success of the Schwoegler grip to me, I might never have embarked on a career in bowling that has now spanned close to 60 years.